Fredrika Bremer was born in Åbo to a particularly wealthy, independent gentleman. From 1804, she grew up in Stockholm and on the estate of Årsta in Österhaninge, where she received a good, albeit conventional, education and upbringing. After a cultural tour of Europe with her family in the 1820s, she developed a depression as a result of the secluded lives led by women at that time. In 1832 she started a correspondence and acquaintance with the philosopher and teacher Per Johan Böklin, who remained her friend and mentor for the rest of her life.

Fredrika Bremer’s literary debut was Tekningar utur hvardagslifvet, which was published in three parts between 1828 and 1831 and included the novel Famillen H*** (Eng. tr. The Colonel’s Family); it introduced a new, everyday tone and realism to Swedish literature. Nya teckningar ur hvardagslifvet includes the novels Presidentens döttrar (1834; Eng. tr. The President’s Daughters) and Nina (1835; Eng. tr. Nina), 1835, which takes a frank look at the subject of women’s emancipation. Her two most carefully composed novels Grannarne (1837; Eng. tr. The Neighbours), and Hemmet (1839; Eng. tr. The Home), were written in Norway. En dagbok (1843; Eng. tr. A Diary), is characterised by lively descriptions of Stockholm, and Syskonlif (1848; Eng. tr. Brothers and Sisters), is an early socialist utopia. Exciting and bold attempts outside the genre of the novel are her old Nordic drama of rebellion, Trälinnan (1840; Eng. tr. Trälinnan) and the theological manuscript Morgonväckter, 1842. Fredrika Bremer’s close association with Norway led her to write, among other things, Strid och frid (1840; Eng. tr. Strife and Peace), a literary contribution to the union debate, and Lif i Norden, 1849, in which she describes her impressions of cultural life in Denmark after her six-month sojourn in Copenhagen.

Hemmen i den Nya verlden 1-3 (1853-1854; Eng. tr. The Homes of the New World: Impressions of America), is an example of groundbreaking journalism, a collection of vivid travel letters to Frederika Bremer’s sister which give an overall impression of the culture, customs, and politics in North America and Cuba. Lifvet i Gamla verlden 1-6, 1860-1862, came about after a five-year journey to countries such as Greece and Palestine. Hertha, eller En själs historia, (1856; Eng. tr. Hertha) is a mature and profound investigation of patriarchy. Her Sjelfbiografiska anteckningar, bref och efterlemnade skrifter, 1868, was published posthumously, but was unreliably edited by her sister Charlotte Quiding. Admirably well edited and annotated are Fredrika Bremers brev 1-4, published by Klara Johanson and Ellen Kleman in 1915-20. A supplementary edition of letters Brev. Ny följd, tidigare ej samlade och tryckta brev 1-2, edited by Carina Burman, was published in 1996.

Fredrika Bremer was an internationally renowned author in the 1840s, and her writing was translated into many languages.

Laurel Ann Lofsvold: Fredrika Bremer and the writing of America, 1999

Ulla Manns: "Fredrika Bremer: a preacher on the borders of religion" in: Perspectives on women's everyday religion, 2010 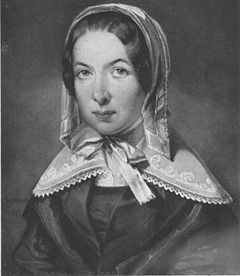