Ellen Key was an important opinion maker at the turn of the century and was born at the estate of Sundsholm in Småland. Daughter of the politician Emil Key, she acquired her learning and knowledge from her liberal parents’ library. When her family lost the estate in the late 1870s, she supported herself through teaching at a progressive girls’ school and by giving lectures at the Arbetarinstitut (Workers’Institute) in Stockholm. From 1876 to 1890, she had a lively correspondence with one of the leading critics of the 1880s, Urban von Feilitzen, who was married and became the unhappy love of her life. Their relationship revolved around writing, with ideas and declarations of love flowing in abundance.

Ellen Key went into self-imposed exile between 1903 and 1909. Upon her return, she created a home for herself in Vättern at the Strand house, which became a gathering place for Europe’s cultural elite. Her debut publication was an article on the Norwegian author Camilla Collett, printed in 1874. In her key works, Tankebilder 1-2, a collection of articles and essays that appeared in 1898, her essay collection Barnets århundrade (1900; Eng. tr. The Century of the Child), and the essayist trilogy Lifslinjer, 1903-1906, she develops her own utopia around the creative person in an attempt to reconcile traditional values such as maternal love and patriotism with a radical view of life. In the 1970s, the women’s movement revived interest in her ground-breaking importance.

Louise Nyström-Hamilton: Ellen Key: her life and her work, 1913 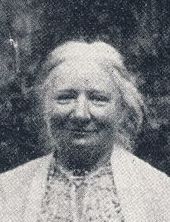