Hanne Marie Svendsen was born in Skagen. Her father was a teacher, her mother a senior librarian. After graduating in Danish and German, she worked as a programme assistant and later deputy head of the Danish Broadcasting Association from 1960 to 1979 and as a lecturer at the University of Copenhagen from 1965 to 1970. She married the publishing director Werner Svendsen in 1954.

In her fiction debut, Mathildes drømmebog (N), 1977, fantasy and sense perception play a central role in her interpretation of the emancipation message of the 1970s. Klovnefisk (N), 1980, is a continuation of the 1970s’ realist tradition; however, she develops an experimental fantasy form in Guldkuglen. Fortælling om en ø (1985; Eng. tr. The Gold Ball). The novel, which was a breakthrough in her writing, is partly inspired by the South American fantasy tradition. Her play Rosmarin og heksevin, 1987, pits Odysseus and Circe against each other in a gender struggle, while Kaila på fyret (N), 1987, and Karantæne (N), 1995, are about characters who have to reconsider their lives and alter their Weltanschauung. In 1996 she published the novel Rejsen med Emma and the children’s book Spejlsøstre about a girl’s encounter with the Skagen painters. In 1998 she published a reworked version of her most successful work Guldkuglen.

The above biography was first published in 1998. Since then, Hanne Marie Svendsen has published the novels Ingen genvej til Paradis, 1999, Unn fra Stjernestene: en roman fra det gamle Grønland, 2003, Den skjulte by, 2006, Nilaus under isen, 2007, and Rudimenter af R, 2009, as well as a number of short story collections, including Skysamleren, 2005, and Gyngende grund, 2010.

Hanne Marie Svendsen is the recipient of a number of awards and honours, including the lifelong artists’ grant from the Danish Arts Foundation, 1993, the Danish Literature Prize for Women, 1998, the Danish Broadcasting Corporation award for best novel, 2004, and the Holger Drachmann prize, 2004. 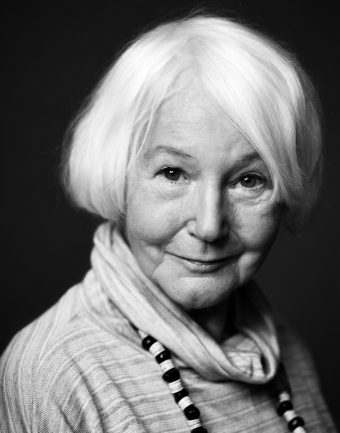