Charlotte Hedevig Schimmelmann held literary salons in the Schimmelmann mansion in Bredgade in Copenhagen and at Sølyst. She was born in Norway, where her father, a German officer, was serving under Danish command, but grew up on the estate of Løvenborg with her mother’s relative, wife of Privy Councillor Løvenskjold. She married Count Ernst Schimmelmann, later Privy Councillor, in 1782, and corresponded mainly in French with women from the German-Danish aristocratic circle associated with the Government and with Charlotte Schiller. This correspondence can be found in Efterladte Papirer fra den Reventlowske Familiekreds i Tidsrummet 1770-1827, 10 volumes, by L. Bobé, 1895-1932 (vols. 4+5+8), and Charlotte Schiller und Ihre Freunde, 2 volumes, by L. Uhrlichs, 1860 (vol. 2). 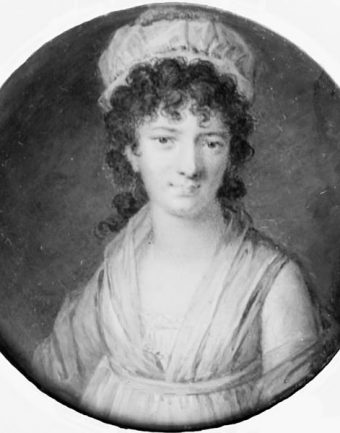