Anna Munch, née Dahl, was the daughter of a doctor, was born in Oslo, and grew up in Trondheim, where her father was a chief medical officer. She sat her exams at the institution Nissens Pigeskole for Voksne and married Peter Munch in 1883, a schoolmaster at the cathedral school in Trondheim, with whom she had a daughter.

Her debut novel Kvinder. Et stykke udviklingshistorie was published in 1889 and, like much of her writing, is biographical in nature, focusing on women artists. In 1893, Anna Munch divorced her husband and left both husband and daughter in order to move to Christiania. As a consequence of her divorce, her ties with her family were broken, and she started frequenting artistic circles, according to her own reports living on the verge of starvation. She published a number of novels and several plays, including Over på den anden side. En julefortælling, 1890, Eros I. Tre skuespil, 1893, and Roser og Tidsler, 1895.

Her novels treat the theme of conflict between the sexes, but they are also characterised by the author’s belief in transmigration of souls. In her novel Verdens Herrer, 1903, the writing process is therapeutic, and in her major work, the novel Glæde, 1904, which centres on the portrait of a child, she depicts a utopian universe. In 1910, she married the author Sigurd Mathiesen, who was fifteen years her junior. 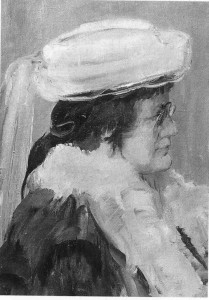