Cecilie Løveid was born on Mysen and grew up with her grandparents in Bergen, breaking off her training as an artist to become a writer. However, her early interest in visual art can be detected in all her texts.

Since her early debut with the anthology Åtte fra Bergen, 1969, she has been extremely productive. The lyrical prose style that is characteristic of her texts makes them hard to classify in terms of genre. This is true of her debut independent publication, the novel Most in 1972 and her texts such as Tenk om isen skulle komme, 1974, Alltid skyer over Askøy, 1976, Mørkets muligheter, 1976, and Fanget villrose, 1977. Her major success as a writer was her lyrical prose novel Sug, 1979, which was enthusiastically hailed by the critics.

With her radio plays Du, bli her, 1979, and Måkespisere, 1982, for which she won the Prix Italia, her writing took a decisive turn. They were followed by a number of other radio plays and dramas: the play Vinteren revner, 1983, the radio play Lydia, 1984, the radio performance Vift. En barnesang, 1985, and Fornuftige dyr, a dramatic triptych, 1986. The theatre and broadcast media opened up to new, radical experiments. In her dramatic works such as Kan du elske? (NKR, Norwegian Broadcasting Corporation), 1982, Dusj, 1 opera for 2 (Bergen International Festival), 1984, Balansedame, Fødsel er musikk, 1984, Dobbel nytelse, 1988, Badehuset (in collaboration with Verdensteatret playhouse), 1990, and Tiden mellom tidene (in collaboration with Lilith Teater playhouse), 1991, she uses artistic means of expression such as dance, images, and music. She has also written the children’s books Lille Pille og lille Fille i den dype skogs teater, 1990, Hund får besøk, 1992, and Den riktige vind, 1996. Her drama trilogy Barock Friise, 1993, Maria Q, 1994, and Rhindøtrene, 1996, is based on historical figures, whom Cecilie Løveid places in their respective eras using poetic licence. Many of her works have been translated and published or performed in several countries.

Cecilie Løveid is considered to be one of the most important and original writers of modern Norwegian literature and theatre and is a central figure in the renewal of Nordic modernism.

Løveid has received several prizes, including Doblougprisen 1990 and the Amalie Skram Prize 1998. 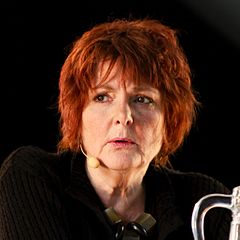