Thekla Knös was the daughter of a professor from Uppsala. After her father’s death in 1828, she and her mother, commonly known as “the small Knöses”, hosted an unpretentious literary salon for the late-Romantic student poets of the 1840s and 1850s.

In 1852 and 1853, she published her collection of poems Dikter I-II, which contain a verse epic modelled on and taking its cue from Esaias Tegnérs Frithiofs saga, as well as everyday poetry and genre poetry for children, seemingly in accordance with the idyllic taste of the period, but with an obvious ambivalence and emphasis on sensuousness. Her works from her final eleven years, spent in a mental asylum, were published posthumously. 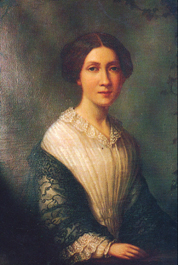