Agnes Kathinka Malling Henningsen was born on the estate of Skovsbo on Funen, the middle of three sisters. While her sisters came to lead conventional bourgeois lives, Agnes Henningsen herself became Denmark’s most prominent female Bohemian. At the age of nineteen, she married Mads Henningsen, had three children, and finding they could not afford more, embarked on a literary quest for love, which became both a consistent thread running through her writing as well as her passport into the artistic circles that provided material and inspiration.

After publishing a number of short stories under the pseudonym Helga Maynert in the daily paper København, she made her debut in 1899 with the novel Glansbilledet, followed in the same year by the novel Strømmen. Literary success came in 1901 with her novel Polens Døtre, although her dramatic works never achieved the success she desired. On the other hand, she turned the art of stage dialogue into her literary style and in the course of her writing developed and refined it. She was widely known, but gained the public’s true affection only at the age of seventy-three, when she published eight volumes of memoirs, which also ensured the perpetuity of her trilogy Kærlighedens Aarstider, 1927-1930.

From start to finish she rejected the norms, conventions, and taboos that smothered women and love. She herself became a good source of material: her divorce, her lovers, her failed attempts to set up conventional occupations for herself to supplement her occupation as a writer, her travels, her theatre premier racked by scandal, her dream of achieving a quiet, comfortable life as a writer by being awarded a Civil List pension – all these aspects of her life fuelled the gossip and provided material for satire in petit-bourgeois Denmark, where female independence was still the exception to the rule. It was partly her own fault. There is a direct link between her life and her work in her writing. Her peers were interested in the clues. Only posterity has gained an insight into the literary orchestration that takes the private conflict and turns it into central questions of life, making her writing one of Danish literature’s most systematic quests for the female paths to love. 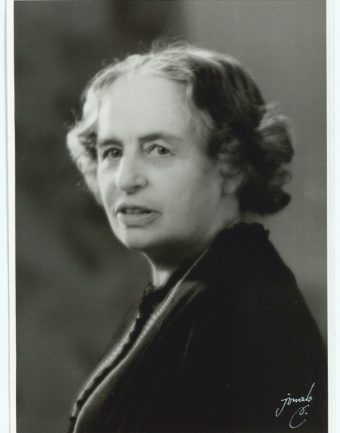