Johanna Maria Skylv Hansen was daughter of a ship’s officer, was born and grew up in Nólsoy, worked as a maid in Tórshavn, and then followed her employer to Denmark, where she married and had eight children. From 1912 she settled on the Faroe Islands, where she began to write after her children had grown older.

Her stories, particularly famed for their culture-historical value and linguistic wealth, depict women’s activities in the old farming community. Her literary universe often includes the mythical. The stories are collected in Gamlar gøtur 1-4, 1950, 1967, 1970, and 1973. Her writing always came second to her life as a wife and mother, and she acquired her own desk only at the age of ninety. 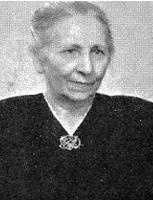