Maria Gripe was born in Vaxholm, grew up in Örebro, and was the daughter of a captain. Following her university studies in Stockholm in 1954, she made her debut as a writer with the fable I vår lilla stad and henceforth exposed and reproached the adult universe by depicting existence from the point of view of the vulnerable, often lonely, child. In 1972 she was awarded the Astrid Lindgren Prize and in 1974 received the Hans Christian Andersen Award.

She made a name for herself with her books on Hugo and Josefin, Josefin (1961; Eng. tr. Josephine), Hugo och Josefin (1962; Eng. tr. Hugo and Josephine) and Hugo, 1966, which for the first time work through the theme that binds her works. A feature of all her books, whether they are set in a fixed time and place, as in Elvis-bøgerne (1972-1977; Eng. tr. Elvis and His Secret and Elvis and His Friends) or in a mythical, mystic world, as in Glasblåsarns barn, 1964, and I klockornas tid, 1965, is the search for individual opportunities for self-realisation and the freeing of the (child) self despite the limits that restrict and dull life. Often, the magic of names is an essential element in this search.

The distinction between the real world and the mythological universe is more or less removed, especially in her later works, while at the same time a real psychological landscape is analysed, such as in her Skuggan series, Skuggan över stenbänken, 1982, …och de vita skuggorna i skogen, 1984, Skuggornas barn, 1986, and Skug-gömman, 1988. Egnä världer was published in 1994 and in 1997 her last book, Annas blomma, was published. 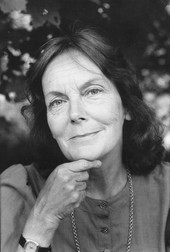