Maria Giacobbe was born on Sardinia and settled in Denmark in 1958. Her father was an engineer and architect, her mother a primary and lower secondary school teacher. She studied languages, theory of education, and philosophy and was married for many years to the author Uffe Harder. Her debut work Diario de una maestrina (N), 1957, translated into Danish in 1961, is about teaching the illiterate.

Her writing characteristically moves between genres and forms and shifts between a Danish, European, Sardinian, and Italian perspective. Dagbog mellem to verdener (N), 1975, deals with the theme of cultural differences, as do her short stories in Kald det så bare kærlighed, 1986, which move from Italy under the Fascists to sexual complexities in contemporary Denmark. Sexuality is a central element in Maria Giacobbe’s writing from Havet (N), 1967, to Ariadnes døtre (P), 1987.

In Øen (N), 1992, cultural conflicts are played out in a grim story of a vendetta killing that pits the secrecy, silence, and notions of honour of traditional society against modern justice and a modern woman’s conflict between the two worlds and the conflict of love. Maria Giacobbe’s memoirs Masker og nøgne engle, 1994, recount her early childhood, the period characterised by the dark clouds of Fascism and the absence of her anti-Fascist father.

Maria Giacobbe, who in addition to other commitments, has been active in the Danske Forfatteres Fond til Ytringsfrihedens Værn (Danish writers’ fund for the protection of freedom of expression) and in Kommiteen for Palæstinensisk-Israelsk Sameksistens (Committee for Palestinian-Israeli Coexistence) was awarded the Beatrice Prize by Det Danske Akademi (the Danish academy of language and literature) in 1995.

The above biography was first published in 1998. Since then, Maria Giacobbe has issued poetry in Rejsebilleder – Persien/Iran, 1999, short stories in Eksil og adskillelse, 2001 and the novel Folk fra Pòju Luàdu, 2006. 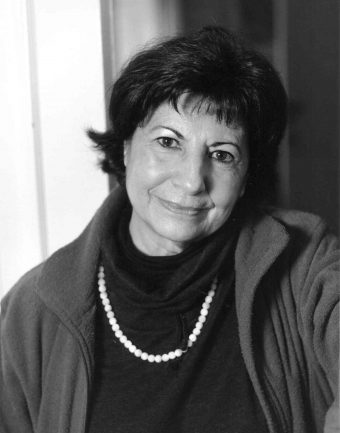