Helena Westermarck was born in Helsinki and was an artist and women’s historian. As a feminist, she was, among other things, active in the suffrage movement and initiated the periodicals Nutid and Astra. With a series of biographies of women from the cultural and political milieu of the period, such as Sara Wacklin, Fredrika Runeberg, and Adelaide Ehrnrooth, she contributed a great deal to Finland-Swedish women’s history.

She became a prominent figure in Finnish breakthrough literature with publications such as Ur studieboken I-II, Berättelser och utkast, 1890-1891, and her novel Framåt, 1894. Best known is her novel trilogy Teckningar och minnesskrift från adertonhundratalet, 1900-1901, a historical family novel about three generations of women depicted in their conflict between the ideal of women and women’s self-perception. Mina levnadsminnen, 1941, was published posthumously. 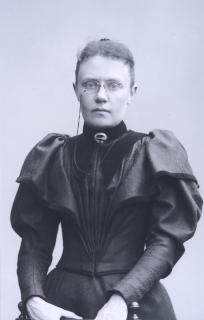