Birgitte Thott was a noblewoman born on Fårupgård near Jelling, daughter of Christen Thott of Boltinggård, who died in 1617, and the scholarly Sophie Below, who with her instruction in modern languages and literature gave her daughter a Christian, humanistic education and an upbringing of a high European standard that was rare for girls. Birgitte Thott married the nobleman Otto Giøe of Turebygård at the age of twenty-two. The marriage was childless, and when she was widowed ten years later, she resumed the studies of her youth and taught herself Latin, Greek, and Hebrew, the three languages that gave access to theological debate. According to sources, she also mastered Danish, German, Dutch, English, French, Italian, and Spanish.

Latin was the main language of her studies and correspondence, and she applied her knowledge specifically to impart European cultural and Christian religious debate to the Danes. She translated from English, German, French, Latin, and possibly Greek, and her translation of the works of the pagan, stoic philosopher Seneca, Lucii Annæi Senecæ Skriffter Fordanskitt, Sorø 1658, which is a reworking of Seneca’s one thousand pages of Latin prose moral, made her an important figure in Danish cultural history. Her translation introduced numerous neologisms and new words to the Danish language, which, with the exception of the History of the Danes by Saxo Grammaticus and the Bible, had never before been the language of translation for such a major work. With this work, the Danes were also provided with a solid cultural alternative.

Among Birgitte Thott’s non-published manuscripts, the most important is a folio manuscript of two hundred pages with an original, morally philosophical treatise in Danish “Om et lyksaligt liv”, written by herself. In an entire chapter in the book, which dates from the late 1650s, possibly 1658, as well as in a dedication speech to Danish women in the Seneca translation, Birgitte Thott expresses her wish that Danish women should have better access to education and to foreign literature translated into the Danish language if they are not allowed to learn foreign languages.

With her point of view that it was more beneficial than damaging for women to study, she joined intellectual women in other European countries, in particular the Dutch woman scholar Anna Maria van Schurman, who, although she did not know Birgitte Thott personally, wrote a Latin tribute to her, printed as the first of twelve in the Seneca translation. Birgitte Thott continued her mother’s genealogical book, and in close association with Sorø Academy and learned circles in Denmark she followed and actively shaped European intellectual life. 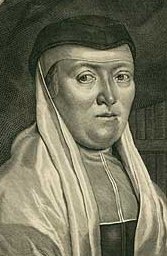