Kirsten Thorup was born in Gelsted on Funen, where her father was a bookseller and newsagent. She was the first in her family to take the upper school leaving examination in 1961, lived in England from 1961 to 1962, and in 1963 married the stage director Ib Thorup, who died in 1990. She studied English and later literature at university, began to weave, had children, and held down various student jobs all the while working as a writer.

Her debut collection Indeni-udenfor and her subsequent Love from Trieste, 1969, I dag er det Daisy, 1971, and the short story collection I dagens anledning, 1968, ranked her firmly among the modernists, but when her sensationally original debut novel Baby about peripheral existences in the Copenhagen neighbourhood of Vesterbro came out in 1973, it was already clear that her writing was a poetic encounter with the world that needed to explore new territory to find its own artistic expression. With her Jonna series, Lille Jonna, 1977, Den lange sommer, 1979, Himmel og helvede, 1982, and Den yderste grænse, 1987, she renewed the genre of the novel, mirroring Denmark’s history after World War II seen through the eyes of a girl named Jonna – as a child in the 1950s’ Danish provinces, as a teenager during the protest years of 1968 to 1970, and as an adult woman back in the Danish provinces. Here, the welfare state, from its first, hopeful beginnings to the disappointing reality of the mid-1980s, finds its place in Danish literature.

Elskede ukendte, 1994, gathers together and releases the fundamental elements of her writing, from alienation and the experience of unreality in the first collections to the arrogance of society that, in the Jonna series, turns belief in the future into the dystopian opposite. In Elskede ukendte, cultural criticism is presented in the form of a power struggle between two megalomaniacs who each escape their religious madness, but together paint a black picture of a society filled with images of downfall and cultures of death. Kirsten Thorup has written for the theatre as well as for radio and television theatre, where her portrait of Amalie Skram, Else Kant 1-2, 1978, was a big success, as was the first part (written in collaboration with Li Vilstrup), and the fifth part of the television series Krigsdøtre, 1981. Through the Jonna series, she became both a favourite with readers and a recognised major name in Danish literature with many literary distinctions and a commitment which extended outside the narrow confines of literature.

The above biography was first published in 1998. Since then, Kirsten Thorup has published the novels Bonsai, 2000, Ingenmandsland, 2003, and Tilfældets gud, 2011.

Kirsten Thorup is the recipient of a number of awards and honours, including the Grand Prize of the Danish Academy, 2000. 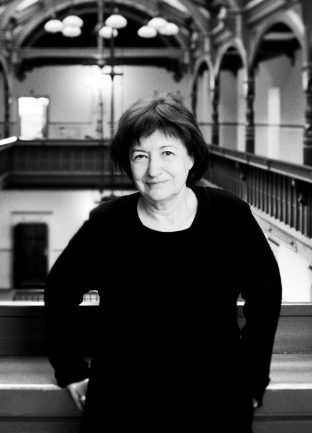