Anna Magdalene Thoresen grew up in Fredericia, where her father was a cargo shipmaster. She qualified as a schoolmistress in Copenhagen, was employed as a governess by the rural dean Hans Thoresen, and married him in 1843, becoming the stepmother and mother of ten children. She was a co-founder of the Det norske Theater playhouse in Bergen, for which she wrote four (unprinted) plays. She became a widow in 1858 and subsequently a professional author. She mostly lived in Denmark after 1861.

Her prolific writing falls into four genres. She mainly used the genre of the poetic-realist peasant tale about simple and, typically, romantic gender-related, cultural myths combined with her own experiences from her peasant childhood and the Norwegian villages. Her works in this genre include the novels Signes historie, 1864, and Solen i Siljedalen, 1868, and the short story collections Nyere Fortællinger, 1873, Livsbilleder, 1877, Mindre Fortællinger, 1891, Elverdrag og andre Fortællinger, 1893, Livsluft, 1895, Udenom Afgrunden, 1897, and Skjæbner og Viljer, 1899. She also frequently used the genre of modern drama, which she introduced to theatres in Copenhagen and Norway at the same time as Bjørnson and Ibsen, albeit with less success, with plays such as Et rigt Parti, 1870, Inden Døre, 1877, En opgaaende Sol, 1881, and En Udflytning 1897. 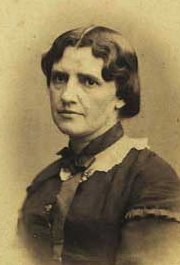