Gun-Britt Sundström was born in Stockholm and grew up in a Free Church community in the suburb of Ängby. After graduating, she trained for a year at a school of journalism and was a cultural journalist from 1970 to 1984. Between 1980 and 2000, she worked on the Bible Commission in connection with the new translation of the Old Testament. She has also served as a board member of Svenska Språknämnden (the Swedish Language Council).

She made her debut in 1966 with Student -64, which like many of her earlier books is about rebellious youth. In 1973 she published För Lydia (N), a paraphrase of Hjalmar Söderberg’s Den allvarsamma leken (1912), and in 1976 Maken. En förhållanderoman, which discusses the impossibility of love and partnership, and which met with the public’s sympathy.

She has also published several volumes of newspaper column causeries, often reasoning and satirical in style, such as in Balkongbok, 1970, and articles associated with her work on the Bible Commission. An autobiographical account of her childhood is printed in the anthology Folkhemsprinsessorna, 1987. 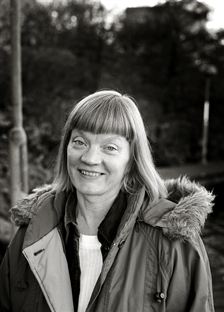