Julie Weber Sødring was born into the Rosenkilde family of actors in Copenhagen and developed a fascination for drama and artistic performance at a young age. She taught herself acting early on by observing the prominent actors of the time.

She made her debut in 1853 and was often given roles such as that of the bourgeois spinster or wife in national comedies and Holberg plays. Using simple means of expression, she cultivated a subdued style of acting and treatment of her lines, wearing no stage make-up, but bringing her characters alive on stage. While Johanne Luise Heiberg interpreted female figures of absorbing interest, Julie Sødring interpreted the naive, but lovable Biedermeier female figures, emphasising gentle, but jovial, satire. She related the story of her life, her art, and her wealth of experiences from the theatre to her son, the lawyer M. F. Sødring, who published her memoirs after her death. 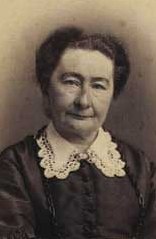