Athalia Theophilia Schwartz was the daughter of a chief fire brigade officer, was born in Copenhagen, and grew up in Aalborg. She was the third person in the country to take the highest level examination for head teachers in 1848, ran schools in Aalborg and Copenhagen, and published a great deal of teaching material.

She wrote two contributions to the fierce public debate on women’s standing that erupted after the publication of Mathilde Fibiger’s book Clara Raphael. Tolv Breve, 1851 – the so-called Clara Raphael controversy – and was subsequently often at the centre of public debate on girls’ schools, for example with her pamphlet Skal jeg sætte min Datter i Skole?, 1859. She also wrote cultural articles and reviews and translated for several periodicals. She made her debut with Dansk Sproglære, 1849, and her debut as a fiction writer with Livsbilleder (SS), 1852.

Her major works are the novels Cornelia, 1862, about the cost to women of an unregistered marriage, Stedmoder og Steddatter, 1865, about the power struggle between two adult women in a home, and Enhver sin Mission, 1870, about the social struggle of single women. In her book Om Stiftelserne til Sædelighedens Fremme, 1867, she explained, on the basis of studies carried out in European cities, how single women often had to resort to prostitution as a means of survival. Her drama, Ruth, 1853, was performed at the Royal Danish Theatre. 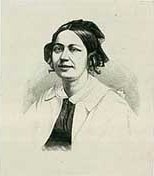