Elisabeth Rynell was born and grew up in Stockholm, but later moved to Norrland with her husband, who died in 1988. She subsequently brought up their two children alone.

She made her debut in 1975 with Lyrsvit m.m. gnöl (P), which, among other things, reflects her shocking encounter with India, her mother’s death from cancer, and the sheet for dead foetuses at the abortion clinic. Her politically committed poetry together with her novel Veta hut, 1979, led to her being accused of harbouring terrorist sympathies. After her political novel, she returned with Onda dikter, 1980, to poetry inspired by Edith Södergran, and in her poetry collections from the 1980s she masters new, poetic expression. In Sorgvingesång, 1985, and Sjuk fågel, 1988, she develops socially aware, ecological poetry that she integrates into an almost mythical and archetypal holistic perspective.

Her novel En berättelse om Loka, 1990, suggestively interweaves the stories of two female characters and two timescales, testing the boundaries between reality and dream. In her two poetry collections Nattliga samtal, 1990, and Öckenvandrare (1993; Eng. tr. From Desert Wanderer), she gives expression to her angry and powerless mourning for her husband who was suddenly snatched from her side. At the same time, the poems have a hidden power, a tone that comes close to old, Icelandic dirges, in which the chanter perceives his dark, sensuous power and takes possession of the words. In her novel Hohaj, 1997, Elisabeth Rynell weaves autobiographical elements into a story from the past to create an antiphony about love and loss.

The above biography was first published in 1998. Since then, Elisabeth Rynell has published the novel Till Mervas, 2002, as well as the poetry collections I mina hus, 2006, and Hitta hem, 2009.

Elisabeth Rynell is the recipient of a number of awards and honours, including Sveriges Radios Romanpris 1998, Aniara-prisen 2004 and Doblougska prisen 2007. 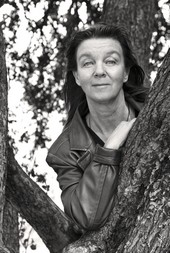