Hagar Olsson was the daughter of a clergyman and grew up in the skerries of Åland and from 1906 onwards in Räisälä in Karelia. After passing the upper secondary school leaving examination, she followed her father’s wishes and studied at Högre Svenska Handelsläroverket (today, Hanken School of Economics) in Helsinki, finding employment as a bank assistant. She studied philology at the University of Helsinki, but never took her exams, being offered a post as critic for the newspaper Dagens Press (later Svenska Pressen) in 1918. In 1922, together with Elmer Diktonius, she published the modernist periodical Ultra. In 1928-1929, she sat on the editorial committee for the periodical’s successor Quosego, and from 1931 she worked with the Swedish radical women’s paper Tidevarvet, the feminist influence of which can be discerned in her novel Chitambo, 1933.

Hagar Olsson, who was unmarried and childless, lived from 1925 to 1928 together with the artist Wäinö Aaltonen and subsequently with Toya (Borghild) Dahlgren until her death in 1932. Her friendship with Edith Södergran between 1918 and 1923, whose letters she published with a commentary in 1955 in Ediths brev (Eng. tr. The Poet Who Created Herself) was especially important in her life. Hagar Olsson’s earlier work is compiled in Tidiga fanfarer och annan dagskritik, 1953, Tidig dramatic, 1962, and Tidig prosa, 1963.

There is a line of development starting with early expressionism and symbolism that can be traced from her debut novel Lars Thorman och döden, 1916, as well as Kvinnan och nåden, 1919, and På Kanaanexpressen, 1929, leading to her radical, period-conscious, trend-based novels centering on women’s struggle for emancipation, namely Det blåser upp till storm, 1930, and Chitambo. Naturally mysterious and empathetic descriptions of ambience together with a sophisticated insight into young people’s emotional life are what characterise her later works Träsnidaren och döden (N) (1940; Eng. tr. The Woodcarver and Death), Kinesisk utflykt (M), 1949, Hemkomst (SS), 1961, Drömmar (SS), 1966, and Ridturen och andra berättelser (SS), 1968. As a modernist dramatist, Hagar Olsson published pioneering works such as S.O.S., 1928, Det blåa undret, 1932, and Snöbollskriget, 1939. 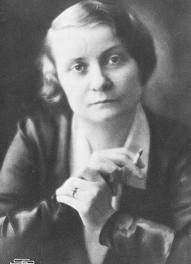