Helena Augusta Nyblom grew up in Copenhagen and was the daughter of the Danish painter and professor Jørgen Roed, whom she accompanied on his cultural travels throughout Europe. When she married Carl Rupert Nyblom, professor of ethics at Uppsala University in 1864, she moved to Sweden, where their home became a meeting place for the intelligentsia of Uppsala.

In Mina levnadsminnen 1-2 of 1922, Helena Nyblom describes the lively social occasions and culturally and historically interesting milieu. She published a series of poetry collections, short stories, and novels early on, but achieved popular success later with her collection of tales Det var en gång 1-2, 1897-1898. Her tales are written in a warm, sensitive style, and many of the well-known artists of the period, such as Carl Larsson and John Bauer, felt inspired to illustrate them. 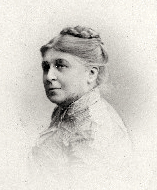