Ragna Vilhelmine Nielsen published the memoirs Fra de smaa følelsers tid, 1907, and grew up in Trondheim as the daughter of Royal Head Clerk Jørgen Ullmann and the writer and literary critic Vilhelmine Ullmann. She qualified as a governess, was employed at a girls’ school at an unusually young age, and later established the first co-educational school in Norway in Christiania.

For two terms, she was the chair of the Norwegian Association for Women’s Rights, of which she was a co-founder, and as a popular speaker, writer, and literary critic she gained a reputation for being one of the sharpest critics of the male viewpoint in the fierce debate in the 1880s about sexual morality. She was also one of the first women to sit on the Christiania City Council. She later became active in spiritualism. 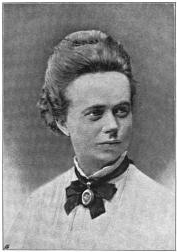