Kate Næss has been called the undiscovered queen of the 1960s; however, her symbolic language, which falls somewhere between 1950s Symbolism and 1960s plain poetry, has also been rejected as ‘private’. She was born and grew up in Oslo, where her father was an office head. As a young woman she studied English and art history, but trained later on as a textile printer.

In the early 1960s she participated in student theatre, soon began performing poetry and jazz, and has translated works by authors such as Lawrence Ferlinghetti and Allan Ginsberg. She was married to the theatre manager Janken Varden and had two children. Kate Næss published the poetry collections Billedskrift, 1962, Mørkerommet, 1964, and Blindgjengere, 1969. 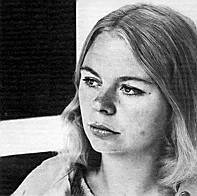