Katharina Marie Bech Michaëlis grew up in Randers, where her father Jacob Brøndum was a telegraphist and her mother a wreath maker. She had difficulty fitting into this petit-bourgeois framework and after moving to Copenhagen to train as a pianist began a process of personal liberation, which later became her main theme. She gave up her dream of becoming a pianist, married the writer Sophus Michaëlis in 1895, and started to write herself.

Her novels Barnet (1902; Eng. tr. The Child Andrea) and Lillemor, 1902, led to her first international success, and she embarked on a life of extensive travelling, speaking engagements, and humanitarian work. The year 1910 saw the publication of her controversial novel Den farlige Alder: Breve og Dagbogsoptegnelser (1910; Eng. tr. The Dangerous Age: Letters and Fragments from a Woman’s Diary), translated into countless languages, describing women’s change of life as a condition similar to insanity. The following year she became divorced from her husband and subsequently lived alone, apart from a brief marriage to an American. In one novel after another she investigates the deforming power of the petit-bourgeois female role; however, it was only in her memoir novel Træet paa godt og ondt I-IV, 1924-1930, which today is considered to be her key work, that she gathered her investigations into one coherent story of liberation.

The hope which eluded her in her adult fiction was shaped in her children’s stories and novels into a utopian society where men and women enjoy equal rights and where respect for animals and nature prevails. Her series about Bibi, I-VII, 1929-1939, is a counterpart to Træet paa godt og ondt. 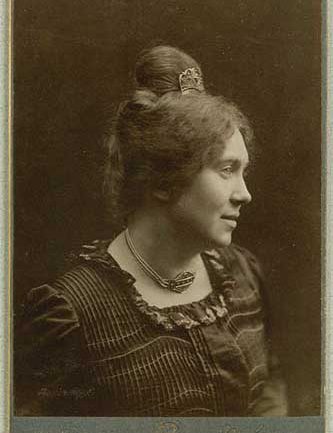