Helvi Juvonen grew up in the home of a commercial family in Idensalmi in Norra-Savolax. After studying Latin and other languages at the University of Helsinki, she earned a living as a proof reader and bank assistant until 1948. In 1951, she travelled to Italy.

After her debut in 1949 with the poetry collection Kääpiöpuu, she published five poetry collections revolving around self-reflection, spirituality, and natural mysticism. Her key works are Kuningas Kultatakki (P), 1950, Pohjajäätä (P), 1952, and Kalliopohja (P), 1955. She belonged to an important group of Finnish post-war women poets who retained and developed the universe and rhythm of popular poetry in a period when others were drawing inspiration from Anglo-Saxon modernism. She also translated works by authors such as Emily Dickinson. 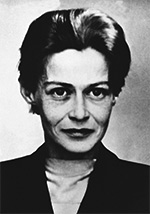