Gurli Hertzman-Ericson was a grocer’s daughter from Gothenburg, graduated in English literature, and married an engineer in Stockholm. Her debut work was Från mor till barn. Sagor för stora och små, 1903, and her writing was prolific, but erratic. She was a bourgeois realist, whose female characters frequently opt for comfort instead of rebellion.

Literary success came with her Stockholm novel Huset med vindskuporna of 1923. Her work Av jord är du kommen …, 1935, like Domaredansen, 1941, is influenced by the female primitivist trend of the period. From 1913 to 1918 she was editor of Rösträtt för kvinnor, worked in the peace movement, and was secretary of Sveriges Författareförening (the Swedish association of writers) from 1937 to 1942. 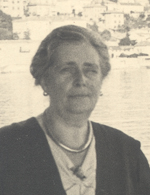