The Swedish Queen Hedvig Elisabeth Charlotta was the daughter of the Grand Duke of Oldenburg, Fredrik August, and was sent to Sweden at the age of fifteen to marry the younger brother of King Gustav III, later King Carl XIII. She had two children from her unhappy marriage, both of whom died in infancy. Her source of pleasure in life was her friendship with Sophie Piper, and she compensated for her disappointment in her diaries, blossoming into an intelligent and keen observer.

She portrays the dignitaries of the Court and the realm and provides an insight into the intrigues surrounding King Gustav III and his successors. The diaries, which are inspired by the great European epistolary literature of the period, are important historical documents, written in French from 1775 to 1817 and published in Swedish translation in 1902-1907 and 1920-1942. 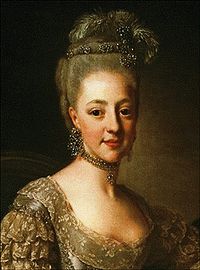