Marie Hamsun was originally an actress, but gave up her career when she married the significantly older writer Knut Hamsun. In 1953 she published an autobiography, Regnbuen, describing her childhood and marriage to Knut Hamsun. The first-person narrator in her autobiography is portrayed as the victim of a demanding writer genius. 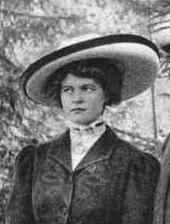