Elisabeth Grundtvig was a feminist and ‘gauntlet moralist’ (an advocate of sexual abstinence prior to marriage for both sexes, inspired by the Norwegian writer Bjørnstjerne Bjørnson’s play En Hanske (A Gauntlet), 1883), and she was the granddaughter of the poet N. F. S. Grundtvig. She grew up in Copenhagen, qualified as a schoolmistress in 1884, became a parliamentary stenographer in 1890, was a member of the committee of Dansk Kvindesamfund (Danish Women’s Society), and was editor of the periodical Kvinden og Samfundet in 1885-1886 and 1890-1895.

As a distinctly modern woman, unmarried and self-supporting, chaste and militant, she initiated the intense public debate of the 1880s about sexual morality, known as the morality debate, when she gave a talk under the heading “Nutidens sædelige Lighedskrav” (today’s demand for equality in chastity), which was printed in Kvinden og Samfundet. Attacking modern literature and holding up the chastity of the unmarried woman as an example to be followed by men, she challenged Georg Brandes. 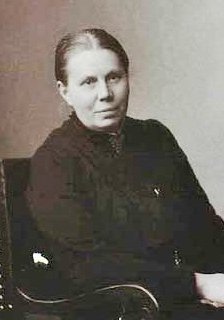