Inge Eriksen was born in Skørping and spent her early childhood in southern Jutland, where her father was a stationmaster. After his death in a German concentration camp in 1945, her mother moved to Aalborg, where she supported the two children by working as a nurse. Inge Eriksen passed the upper secondary school leaving examination in 1957, became a teacher in 1973, and taught in municipal primary and lower secondary school until 1975, when she (jointly with Jytte Rex) made her debut with Kællinger i Danmark, a sensuous cross-genre book about female emancipation.

On account of her sensational two-volume novel Victoria og verdensrevolutionen, 1976, about the socialist revolution that should have been, Inge Eriksen is one of the major novelists of the 1970s. With its utopian depiction of the women’s movement and the left wing, the novel was continued into a trilogy and was complemented by Fugletræet, 1979, about the present-day dichotomy between work and love, and Silkehavet, 1981, a historical novel about the bourgeois revolutions in 1782-1797. Her next big venture was the science fiction series Rummet uden tid 1-4, 1983-1989, which describes contemporary history from an ambitious starting point, namely an apocalyptic ecological disaster that has rendered the Earth uninhabitable. Her novel Alice, Alice, 1991, marks the end of her examination of utopian future scenarios.

After Hjertets femte kammer, 1992, and Hertuginden, 1995, she is back with the contemporary novel, no less convincingly with Sommerfuglens vinge 1, 1997, which, rooted in hope and meaning, seeks to understand the period between the fall of the Berlin Wall in the autumn of 1989 and the coup against Gorbachev in the late summer 1991, an issue which she pre-empted in essay form in Skytsengle, 1994, also containing a beautiful autobiographical account of her relationship with her early deceased father.

Inge Eriksen, who has made her mark as an intellectual in public debate, has been a periodicals editor, freelance writer, and left-wing activist.

The above biography was first published in 1998. Since then, Inge Eriksen has published another two volumes in her trilogy Sommerfuglens vinge: De rumænske bøfler, 1999, and Vinterhaven, 2001. Apart from this, she has, among other works, written the novels Citrontræet, 2003, En kvinde med hat, 2005, and Blues for en lyserød sko, 2007, as well as the memoirs Brød og roser, 2009. 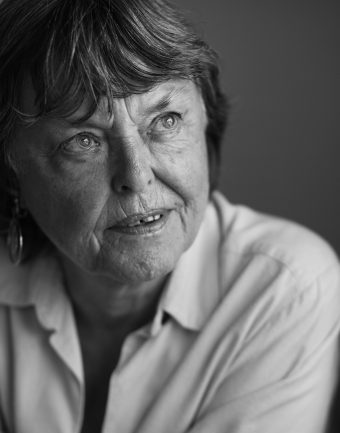