Betty Borchsenius was the daughter of a merchant, was born and grew up in Copenhagen, married the actor Otto Borchsenius, and was herself a widely-admired actress within the genre of naturalist domestic drama.

Shortly before she was hospitalised due to mental illness, her collection of short stories, Situationer, was published in 1884. It is one of the most experimental attempts to create stage-like shifts in perspective and an Impressionist glimpse of situations. 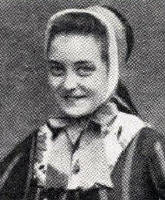