Jenny Berthelius was born in Stockholm, where her father was an office manager and her mother a singer and reciter. She completed her schooling at a girls’ school in Helsingborg in 1940, passed her upper secondary school leaving examination in 1942, and studied comparative literature in Lund from 1978 to 1982. She married in 1944 and had a daughter with Sven Berthelius, who died in 1970.

She has worked as a translator and freelance writer, but is best known for her detective novels. After her debut work in 1968, Mördarens ansikte, she published one detective novel each year for twenty consecutive years. In 1969, she was awarded the newspaper Expressen’s prize for the best Swedish detective novel. She lives in Arles in the south of France.

The above biography was first published in 1998. Since then, Jenny Berthelius has written several works, including her first detective novel in fifteen years, Näckrosen, 2007. In 2004 she recieved the diploma Svenska Deckarakademins Grand Master-diplom. 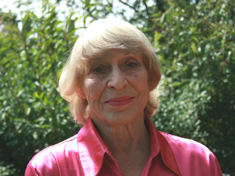