Ann-Charlotte Alverfors was born in Eksjö and now lives in Uppsala. She describes herself as self-taught with three years of education at folk high school. Her debut work was a collection of poems, Paternosterhissar, 1972, followed by Jönköping 6 (P), 1975, and she has published a dozen or so works of both prose and poetry.

However, it was her autobiographical trilogy about Gertrud, or Spurveøje (Sparroweye) as the main character is called, that brought her success. Here, she portrays how generations of women have made their lives possible. Her literary work is a continuation of Moa Martinson’s efforts to alter literature’s view of working-class women’s lives, their wants, anger, and desire for knowledge. This is the main theme of the three novels Sparvöga, 1975, Hjärteblodet, 1976, and Snabelros, 1977, (published as the Spurveøje trilogy in 1990), all of which were adapted for television. She has subsequently published several books, including Aldrig (N), 1993.

The above biography was first published in 1998. Since then, Ann-Charlotte Alverfors has written the novel Barn av samma ögonblick, 2000, and the autofictional illustrated novel Vem ska trösta Gösta?, 2007. 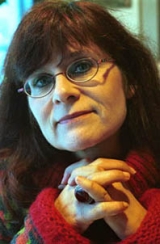