Sonja Åkesson was born in Buttle in Gotland, where her father was a stationmaster. She worked from the age of thirteen as a maid, waitress and telephonist, and got married at an early age to a carpenter. She later had two other marriages, one to the researcher and writer Bo Holmberg and one to the concretist poet Jarl Hammarberg. Of her five children, one died in infancy.

In 1957 she made her debut with the poetry collection Situationer, half of which is an imitation of 1940s literature, while the other half pre-empts the new poetics of the 1960s. Her other works are Husfrid (P), 1963, one of the most important books within the new plain literary style, and the collage satire Pris, 1968, which became one of the most powerful works of political poetry. Other artistic high points are the poetry collections Dödens ungar, 1973, and Hästens öga, 1977. She also wrote short stories and a novel, and she modernised the theatre through her collaboration with the new, free groups, in particular the Fickteatern and Narren theatrical company.

Sonja Åkesson is the first Swedish poet to mirror life in the household. She had a large, devoted readership, and following her death her poems were published in various paperback editions. 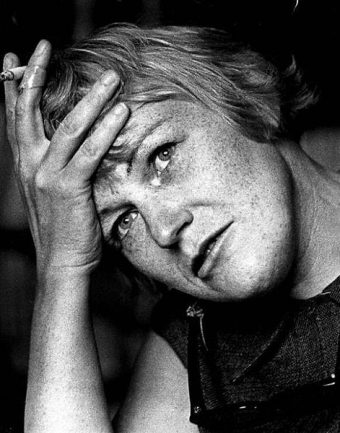