Lydia Katarina Wahlström grew up in Barkarö parsonage in Västmanland, completed her upper secondary schooling at the girls’ school Wallingska Flickskolan in Stockholm, and as the founder and chair of the women’s student union was a central figure in the community of women academics in Uppsala in the 1890s. In 1898 she became the third woman in Sweden to be awarded a doctorate with her thesis Sveriges förhållande till Danmark 1788-89 and four decades later became titular professor. After a few years as the principal of a boarding school in England, she became principal of Åhlinska Flickskolans upper secondary school for girls in Stockholm in 1900.

As chair of the movement for women’s suffrage, she set up suffrage associations all over the country and in 1933 wrote Den svenska kvinnorörelsen. Historisk översikt. In 1918 she published the fiction work Daniel Malmbrink, in 1920 Sin fars dotter, and in 1924 Biskopen, three interesting novels with autobiographical touches and religious questions. She worked for the liberal theologians’ periodical Kristendomen och vår tid, lectured early on about the consequences of Nazi ideology, and initiated the broad education at the Fredshögskolan (peace college) in Stockholm. She underwent psychoanalysis in 1934, which she describes in Pastoralpsykologi, 1945. Her memories Trotsig och försagd were published in 1949. 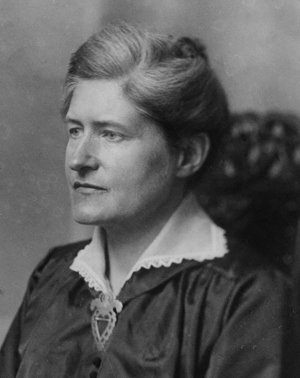