Katri Vala wrote free verse and belonged to the first generation of Finnish modernists. She was the most prominent poet in the so-called torch-bearer group (an innovative literary group in Finland in the 1920s). She passed the upper secondary school leaving examination, qualified as a school teacher in 1922, and worked as such until the late 1920s, when she contracted tuberculosis. She married in 1930, had two children, and lived in poor conditions in the 1930s.

She made her debut in 1924 with the poetry collection Kaukainen puutarha, which attracted much attention with its intoxicating, exotic, colourful, and metaphorical expression. She was a literary critic and conversationalist in left-wing newspapers, using the pseudonym Pecka. Her writing, which includes works such as Paluu, 1934, and her final book Pesäpuu palaa, 1942, examine the theme of human defence, social responsibility, and pacifism. During the war, she went to Sweden, where she died at Eksjö sanatorium. 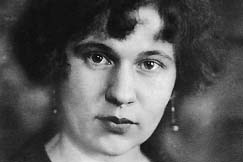