Iris Uurto grew up in a farming community in eastern Finland. Her novel Kypsyminen, 1935, was instrumental in causing the literary battle on politics and sexual morals in 1936. As a young office clerk and proofreader in Helsinki, she sat the upper secondary school leaving examination and studied for a brief period at university. After one year of marriage to the author Aku Rautala, she was widowed and left to bring up their son alone.

From her debut in the spring of 1930 with Tulta ja tuhkaa (SS/P) and her breakthrough with Ruumiin ikävä (N) in the autumn of the same year, she was able to earn a living from her writing. In her key work, the novel Ruumiin viisaus of 1942, she deals with meditation, but she became well-known for her direct approach to sexual motifs. She is also appreciated for her psychological depictions and wrote not only prose, but also poetry and tragedies. 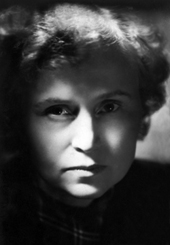