Birgitta Alma Sofia Stenberg was born in Visby in 1932, where her father was a pharmacist. She passed the upper secondary schooling examination in Stockholm and as a young woman travelled through Europe to study languages and collect material from the writing career she chose for herself early on. In 1965 she moved to the island of Åstol in Bohuslän, where she married Håkan Lagergren in 1974, with whom she ran a commercial fishing business and worked as a translator. After her husband’s death in 1991, she expressed her sorrow in the poetry collection Mannen i havet, 1992.

She made her debut in 1956 with Mikael och poeten, a novel set in Stockholm’s underworld, based on a murder and a national scandal. After her novel Chans, 1961, which was filmed in 1962, she was dubbed raggarprinsessa (raggare: a young person whose main interest is big American cars), and pushed out of the literary world. With her sexually exploratory, free language work Kärlek i Europa, 1981, she burst back onto the literary scene and followed up with an autobiographical suite, which includes Apelsinmannen, 1983, and Spanska trappan, 1987. Her earlier work Rapport, 1969, about her time as a drug addict could be considered to be part of this suite. In Tusenbröderna, 1988, Detta med Doris, 1989, and Arabesk, 1994, she describes a society in the Swedish wilderness, where the arrival of a young, pathological liar has an impact on the whole population. In 1996, her third poetry collection Pagodernas Drottning was published.

Birgitta Stenberg has also written children’s books, many of which are about independent girls who solve the boys’ problems.

The above biography was first published in 1998. Since then, Birgitta Stenberg has published the two autobiographical novels Alla vilda, 2004, and Eldar och is, 2010. Additionally, she has published her first novel, Fritt förfall, 1952/2006, which was rejected when she first submitted it, as well as the short story collection Erotiska noveller, 2008. 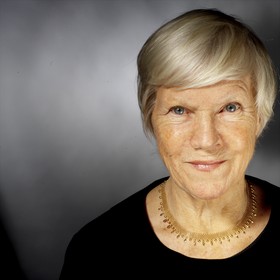