Carolina Wilhelmina Sandell, marital name Berg, was the most popular hymn writer of the Swedish revival movement and the daughter of a clergyman from the Småland village of Fröderyd. Her delicate constitution gave her access to study. Following her parents’ death, she was employed in 1861 by the Evangeliska Fosterlands-Stiftelsen (the Swedish Evangelical Mission) in Stockholm as an editor, translator, and writer.

She made her debut in 1853 with Andeliga vårblommor (P), which centres on the desire for freedom and peace after death. In 1855 she began collaboration with the composer Oscar Ahnfelt on his series of Andeliga sånger, and from 1856 she wrote in Budbäraren and for children in Dufworösten. The songbook Pilgrimsharpan containing, among other things, fifty hymns by Lina Sandell, was issued in 1861 and was followed by a plethora of song-books, children’s books, and calendars. From 1882 to 1892, Samlade sånger av L. S. was published. Lina Sandell’s works can also be found in the Swedish church’s hymn book, and hymns by her such as “Blott en dag, ett ögonblick i sänder” (Eng. tr. “Day by Day and with Each Passing Moment”) are even familiar to those who have never heard of the author. 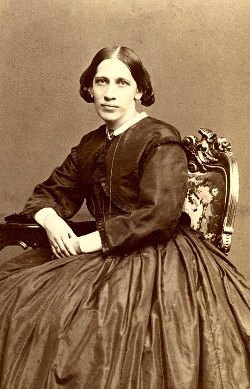