Astrid Saalbach was born in Søborg near Copenhagen and is married to the pianist Jens Kaas. She trained as an actress at the Danish National School of Theatre and Contemporary Dance in 1978 and made her debut as a dramatist in 1981 with the radio play “Spor i sandet”, written while she was unemployed.

Astrid Saalbach’s first play focuses on the female main characters’ experience of social unreality, of the absence of meaning and identity. Her plays do not represent an easy social realism, but expose the vacuous zones and the strange, dream-like states that occur in the young person’s psyche and in the surrounding world when society exerts its anonymous and strangely intangible pressure. Her dramatic effects are often simple and few, yet insistent and suggestive. “Den usynlige by”, 1986, Saalbach’s first stage work, is about the unemployed character Mette, who becomes an assistant at a rest home and experiences how death is professionalised and sees herself losing her human side.

Present-day human experiences and problems are in the foreground in Astrid Saalbach’s universe, also in the television play “Myung”, 1989, about an intact married couple who adopt a girl from a developing country. Their illusion about love overcoming all difficulties vanishes, and the little child confronts them with everything they themselves cannot cope with or tolerate about themselves.

Astrid Saalbach’s new psychological realism full of elementary suspense is also present in her short stories in Månens ansigt, 1986, and in her novels Den glemte skov, 1989, and Fjendens land, 1994. In her plays from the 1990s, such as Miraklernes tid, 1990, Det velsignede barn, 1996, and Aske til aske – støv til støv, 1998, the latter being based on a true murder case, Astrid Saalbach positions herself among the leading dramatists of her generation.

She has been a member of the editorial team of the periodical Kritik and a representative of Statens Kunstfond (the Danish Arts Foundation) and has received numerous prizes and grants.

The above biography was first published in 1998. Since then, Astrid Saalbach has written a number of plays as well as the novels Den hun er, 2000, Fingeren i flammen, 2005, and Fordrivelsen, 2011. 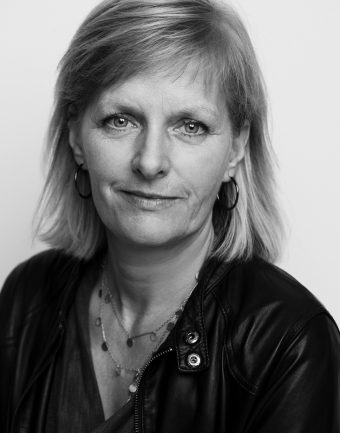