Mirkka Rekola grew up in Tampere as the daughter of a newspaper editor and a teacher. She is one of the most remarkable 1950s Finnish modernist poets. She studied humanities at the University of Helsinki and later worked as a literary critic.

She made her debut with Vedessä palaa (P), 1954, and published collections of poetry and aphorisms such as Tunnit (P), 1957, Muistikirja (P), 1969, and Tuoreessa muistissa kevät, 1987, which is a compilation of aphorisms from earlier collections. She is a master of ambiguity and expresses herself minimalistically, yet profoundly, using a form that sets rhyme and rhythm free. Taivas päivystää (P) was published in 1996.

The above biography was first published in 1998. Since then, Mirkka Rekola has published several works, including the poetry collections Valekuun reitti, 2004, and Vesi on maailman muisti, 2007. 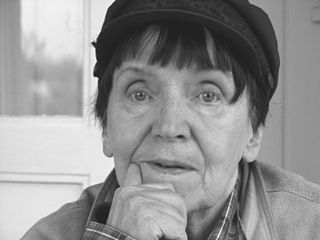