Larin Paraske is the best known of the Finnish-Karelian singers. She was of Izhorian descent, and her father was the adscript blacksmith of a landowner in a village near Saint Petersburg near the then Finnish border. She became an orphan at seventeen, but was emancipated from serfdom by marrying an old farmer of Finnish descent. She emigrated to Finland, where she earned an extra income by looking after orphans from Saint Petersburg. She herself had nine children, of which only three survived into adulthood, and was widowed at the age of fifty-four.

She became famous when the village clergyman from her home parish of Sakkola, Adolf Neovius, began to record her songs. She met Finland’s cultural elite – men such as Jean Sibelius and the painter Albert Edelfelt – who saw her as the archetypal Finnish woman, a figure from the Finnish Kalevala and Kanteletar national ballads. Over ten thousand verses by Larin Paraske have been preserved. Her songs describe the life cycle of peasant women; the ballads about marriage and husbands are particularly lively and full of character. 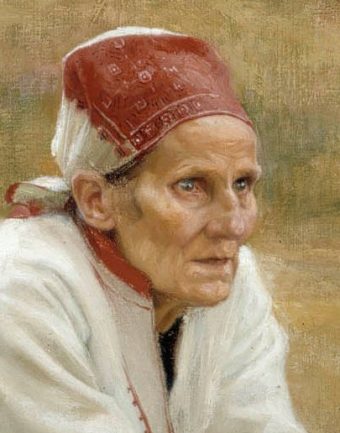