Nina Karin Monsen was born in Bergen and graduated in philosophy. She is married and taught for some time at the University of Oslo. Her philosophical works Det kvinnlige mennesket, 1975, and Jomfru, mor eller menneske?, 1984, are characterised by a personalistic approach, which served to make her a controversial figure in the women’s movement.

In 1976 she made her debut as a fiction writer with Kvinnepakten, a novel which caused a stir with its crass depiction of maternal love. She subsequently published the diary novel Jammersminne, 1980, about a woman’s struggle to define herself as an independent and positive person. Ethical issues stand at the heart of her short story collection Dødt liv, 1987, her novel Inntrengere, 1989, and her philosophical works Det elskende menneske. Person og etikk, 1987, Det kjempende menneske. Maktens etikk, 1990, and Under godhetens synsvinkel. Livsfilosofiske essays, 1992.

The above biography was first published in 1998. Since then, Nina Karin Monsen has published a number of philosophical books, her latest being Det innerste valget. Språk, tanke, mening, 2007 and Kampen om ekteskapet og barnet, 2009.

She was awarded the Fritt Ord prize in 2009. 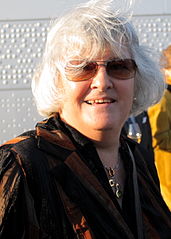