Aslaug Johanne Groven Michaelsen was the daughter of the singer Ragna Hagen and the composer Eivind Groven, is professor of Nordic literature, and was active in the cultural, educational, and enlightening Norwegian heritage movement known as Suttung. She is married and has five children. Since her debut novel Draugen ler, published in 1953, she has published short story collections, essays, and novels, such as Brylluppet på “Arken”, 1955, and Som rever blant ruiner, 1959. Her writing, which is influenced by Romanticism and symbolism, often challenges nature and civilisation. 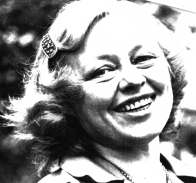