Alice Lyttkens was born into the family of a socially-minded doctor in Malmö and married a lawyer from Stockholm, Yngve Lyttkens, in 1918. They had three children, of whom one son died in infancy.

Her debut work Synkoper was published in 1932, and during the 1930s she wrote a series of emancipation novels about the problems faced by modern women in their efforts to combine love and work, such as Flykten från vardagen, 1933, – kommer inte til middagen, 1934, and her trilogy about the lawyer Ann Ranmark, 1935-1937. Her detailed, everyday realism and her predilection for positive heroines made her popular with readers; however, her truly successful works were her classic, historical novels about an eighteenth century family called Tollman, of which the first book was entitled Lyckans tempel, 1943.

She wrote a total of about fifty novels as well as an ambitious history of women in three parts, published in 1972-1974. Her memoirs in seven parts, Leva om sitt liv, 1977-1989, make mention of all the writers, artists, and business and political personalities who passed through the renowned salon hosted by her husband and herself, which was a gathering place for anti-Nazis during World War II. 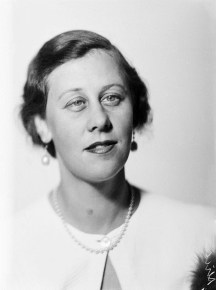