Leonora Christina Ulfeldt was a beloved daughter of King Christian IV of Denmark and Kirsten Munk, whose autobiography Jammers Minde is a highlight of Danish literary history. At the age of nine, she was betrothed and in 1636 married to Corfitz Ulfeldt, by whom she bore ten children between 1637 and 1651. While she studied languages, painting, and music, he pursued a career under King Christian IV.

In 1643, Ulfeldt was appointed seneschal, but in 1651 the couple moved to Sweden for fear of investigation into Ulfeldt’s accounts. When they fled Sweden nine years later, they were captured in Copenhagen by King Frederik III and imprisoned in the fortress of Hammershus on the island of Bornholm, from where they were released in 1661 in return for forfeiture of all property in Denmark. During a stay at a Brandenburg health resort, Ulfeldt offered the Elector of Brandenburg the throne of Denmark in 1662. Frederik III was informed, and the Supreme Court sentenced Ulfeldt in absentia to removal of all honour, life, and property. In 1663 Leonora Christina was arrested in Dover and incarcerated in the Blue Tower, accused of complicity in Ulfeldt’s treason. She was never sentenced, but remained imprisoned in the Blue Tower for twenty-two years.

The oldest known prose works by Leonora Christina were written during her sojourn in Sweden and later in Pomerania. The prose texts describe the wedding of King Karl Gustav in 1654, Leonora Christina’s journey to Korsør to seek reconciliation with King Frederik III in 1656, and her defence of Ulfeldt against accusations of treason against the Swedish King in Malmö in 1659.

In the Blue Tower, she wrote an autobiography in French, which circulated in transcripts, as well as her work in defence of women, Hæltinners Pryd, only part of which survived in transcript, and parts of Jammers Minde, which was completed in Maribo, where she died. Jammers Minde, which was first printed in 1869, is a moving account of her person and the period, a bold and carefully written self-portrait. 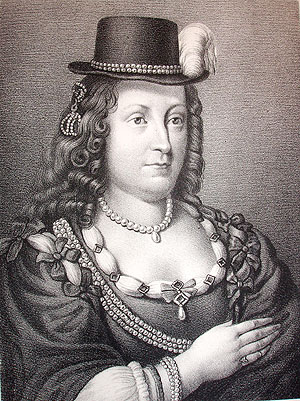