Janina Katz was born in Krakow in Poland, lived in hiding with her mother during World War II, and has lived in Denmark since 1969. She graduated in Polish literary history and sociology, is a literary critic and translator, and works at the Royal Library in Copenhagen.

Her debut collection Min moders datter, 1991, was followed by Mit uvirkelige liv (P), 1992, and I mit drømmeland (P), 1993. Mit liv som barbar, 1993, is a partially autobiographical novel about a young girl’s life as a young Polish communist. In 1994, she published Heltens tykke kone og andre historier, followed in 1996 by the poetry collection Udenfor sæsonen, which with subtle irony and a cheerful undertone examines the themes of age, remembrance, and love, and subsequently Den glade jødinde og andre historier, 1998.

Janina Katz is the recipient of a number of awards and honours, including Det Danske Akademis Beatricepris in 1999 and Statens Kunstfonds livsvarige ydelse in 2002. 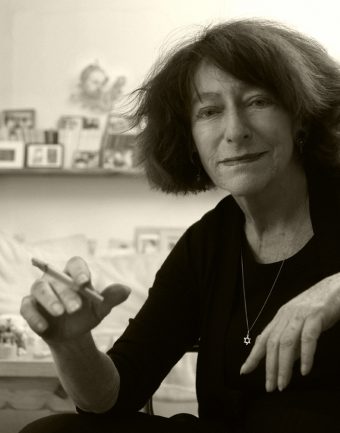