Mare Kandre had an Estonian background and spent a few years in Canada from the age of six. Back in Sweden, she began to paint and play music and started to write at the young age of twelve with the aim of being published.

In her debut short story I ett annat land, 1984, she describes her family’s journey through the USA. Characteristic of her account is the young girl’s affinity with nature and the use of language, which spontaneously expresses the girl’s physicality. This paradisiacal condition is woven into her later works as an image of a lost country and a lost language in her Bildungsroman Aliide, Aliide, 1991, which also has strong autobiographical traits. In her collection of prose poetry, Bebådelsen, from 1986, the first-person narrator becomes part of a timeless and cyclical, female structure. In Bübins unge (N), 1987, the struggle towards adulthood takes on claustrophobic and archetypal dimensions. This is especially reflected in the language, which is saturated with symbols and metaphors.

In her later writing, Mare Kandre strived for a more realistic and simple form. In her collection of prose poetry Deliria, 1992, this new orientation is very evident, especially in the direct appeal to the reader in the introductory passage. Here, too, she expressed her view of the writer’s role as a seer and active member of society. Once again, in Quinnan och Dr. Dreuf (N), 1994, she took a new direction. She abandoned her fateful attitude to existence and, in an overstated, unequivocal, and mocking manner, criticises the traditionally patriarchal view of women. Her formerly metaphorical and symbolic femininity was transformed into conscious, historical criticism.

The above biography was first published in 1998. Since then, Mare Kandre wrote the novels Bestiarium, 1999, and Xavier, 2002, as well as the short story collection Hetta och vitt, 2001. 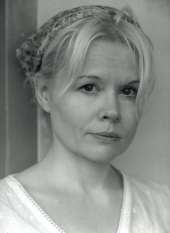