Ingibjörg Haraldsdóttir trained as a film and theatre director in Moscow and Havana. She lived abroad for twelve years, worked as a journalist, film critic, editor, and translator of Russian and Spanish. From 1994 to 1998 she was chair of Islands Forfatterforening (the Writers’ Union of Iceland). She is twice divorced and has two children.

In 1974 she made her debut with the poetry collection Þangað vil ég fljúga, revolving around the main theme of foreignness and the schism between cultures. The poems are brief in form, and the language is simple, yet rhythmic; they are characterised by socialist commitment. Her second poetry collection Orðspor daganna, 1983, treats the theme of alienation in one’s own country, trapped inside others’ myths.

In her collection Nú eru aðrir tímar, (P), 1989, she ironically distances herself from earlier ideals. Her poems have become even more subdued and minimalistic, while in Höfuð konunnar (P), 1995, the poems are feminist, underpinned by subtle humour and irony.

The above biography was first published in 1998. Since then, Ingibjörg Haraldsdóttir has written the poetry collections Hvar sem ég verð, 2002, and memoirs in Veruleiki draumanna, 2007. 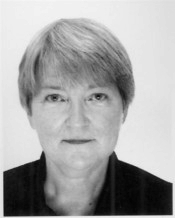