Carola Hansson was born in Stockholm and obtained a PhD in Russian at Stockholm University in 1975. She has worked as a teacher, translator, and dramaturgist for Swedish television and is married to a professor of literature, Ulf Boethius. In the early 1980s she published jointly with Karin Lidén two books on women in Russia, Samtal med kvinnor i Moskva, 1980, and Kvinnan & Ryssland, 1981, and her debut novel Det drömda barnet was published in 1983. Det drömda barnet is an account of her childhood, and the special ambience of fear and longing that underpins her writing is already discernible in this first work. Stilleben i vitt, 1985, comes close to her precise and extremely visual style of writing, which has crystallised over the years.

The vulnerable child at the centre of her first novels or on the periphery in her subsequent books Pojken från Jerusalem, 1986, De två trädgårdarna, 1989, and Resan till det blå huset, 1991, demands constant attention. Her lost childhood evokes very strong emotions. In Carola Hansson’s novels there is a gap between the words and what they denote. The reality, like the child inside us, is inaccessible, but her texts constantly reach out after reality, both figuratively and literally. Her novel Andrej, 1994, was highly acclaimed by the critics. 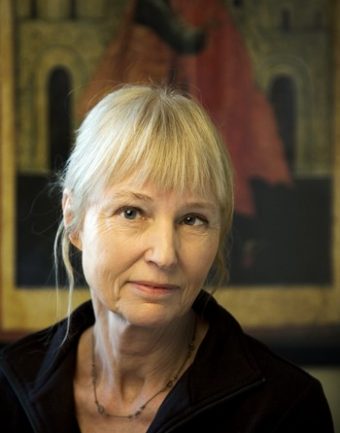